Welcome to Promo2day where we feature giveaways, contests, software sales, along with a fun and friendly forum!

Overview
Everyone knows the frustration of a Windows system becoming progressively
slower the longer it is used and burdened with more software and data.
With over 100 million licenses sold, Diskeeper has been the undisputed leader
in keeping Windows systems running like new. Diskeeper 18 with DRAM caching
builds on the powerful legacy of Diskeeper by going well beyond just keeping
Windows systems running like new but actually guarantees to fix your worst
performing physical servers or Windows PCs with faster than new performance
or your money back for 90 days—no questions asked. Simply install and watch
performance problems disappear – no reboot required.

Diskeeper 18 Now With DRAM Caching
Instead of “defragging,” Diskeeper 18’s patented engine ensures large, clean contiguous writes from Windows so
fragmentation is no longer an issue for HDDs or SSDs. This eliminates the “death by a thousand cuts” scenario of small,
tiny writes that inflates I/Os per second, robs throughput, and shortens the lifespan of HDDs and SSDs alike. Diskeeper
18 delivers dramatic improvements to Windows system performance with the new addition of dynamic memory caching—
using idle, available DRAM to serve hot reads without creating an issue of memory starvation or resource contention.
The latest PCMark benchmarks reveal that Diskeeper 18 increases the performance of Microsoft Office by 73%. Diskeeper
18 Server speeds system performance of the most I/O intensive applications like those running on MS-SQL Server.
Intel Iometer tests that simulate MS-SQL workloads according to Microsoft’s specs on physical servers, show that
Diskeeper 18 Server can boost performance by as much as 10X depending on the amount of available DRAM that can
be leveraged for cache.

Diskeeper 18 with Write and Read Optimizations
Where typical defragmentation utilities consume resources to operate and deal with fragmentation only after the
performance penalty has already been incurred, Diskeeper 18 is the only proactive solution that solves the problem
in real-time while running transparently in the background, eliminating fragmentation issues from occurring on HDDs,
SSDs, and SAN storage systems while also eliminating the IOPS inflation from many small writes and reads. Diskeeper
18 boosts performance faster than new with DRAM caching. The real genius in Diskeeper’s newest engine is that
nothing has to be allocated for cache. Diskeeper dynamically uses only what is idle and available at any given moment
and throttles according to the need of the application. If memory is under-provisioned and the application or processes
ask for some or all memory, the caching engine throttles back. However, with as little as 4GB of available DRAM that
can be leveraged for cache, Diskeeper commonly serves 50% of read traffic straight from memory which is 15X faster
than SSDs.
The net effect of both fragmentation elimination and DRAM caching means Diskeeper 18 offloads a minimum of
30-40% of I/O traffic while systems with a little more DRAM see upwards of 50% for big performance gains. Since
Diskeeper is transparent, “set-and-forget” software, and operates with near zero overhead as a lightweight file system
driver, organizations achieve significant performance gains without management or system resource overhead.

Enhanced Reporting
If you never knew how much Windows inefficiencies were robbing system performance, Diskeeper 18 calculates time
saved from eliminating unnecessary I/O traffic to underlying storage via proactive fragmentation elimination and
caching hot reads from idle DRAM. Diskeeper 18 enables IT Administrators can see the percentage of all read and write
traffic offloaded from storage by Diskeeper and see how much I/O capacity has been handed back to underlying SSD
and/or HDD storage.

Diskeeper’s intelligent resource monitoring, InvisiTasking, ensures all optimization occurs without hampering system resources, so servers can operate at full production while Diskeeper runs in the background. InvisiTasking monitors resource consumption on a Windows system (disk, memory, network and CPU usage) and uses only resources that are otherwise idle, so Diskeeper runs invisibly with no intrusion on system resources. InvisiTasking monitors volumes for files that are impacting performance and deploys the Instant Defrag engine to consolidate the few remaining fragments on HDDs (SSDs excluded) that were not eliminated by IntelliWrite, if any. With Diskeeper Professional, optimization is proactive, continuous and seamless.

For IT professionals who need to deploy Diskeeper across multiple PCs, the Diskeeper Administrator console allows for seamless network deployment – no reboot required. For Windows PCs, Diskeeper is the only highly efficient and proactive software for maximum performance—making it the #1 solution for keeping Windows PCs running better than new.

IntelliWrite write I/O optimization technology prevents files from being
fractured and broken apart into smaller pieces before being written to disk or
SSD in a non-sequential manner.

Instant Defrag technology has been enhanced to monitor volumes
to resolve critically fragmented files in real-time that are known to cause
performance problems, making it SAN-friendly. This feature is turned off in
the event of solid-state drives.

Enhanced Reportingshows how many fragments are eliminated, what
that means to percentage of write I/O traffic has been reduced and how
much I/O time has been saved on the system as a result. Furthermore, see
what percentage of read requests are cached from idle memory and how
much time that saved your system by serving reads from DRAM instead of
underlying HDD or SSD storage. See free spaces consolidated and many
more I/O performance metrics to understand what is occurring on your
system and how much benefit Diskeeper is providing.

Efficient Mode offers the greatest net gain in system I/O resource savings
ever available. It immediately targets and eliminates only fragmentation on
HDDs that directly impacts system performance that is on the system before
Diskeeper was installed since Diskeeper automatically prevents any new
fragmentation after installation.

Free Space Consolidation Engineswiftly consolidates free space and
tightly integrates with Instant Defrag to handle new fragmentation as soon
as it is created.

Diskeeper Administrator ManagementConsole makes centralized
deployment and management of Diskeeper easy even on the largest
networks with hundreds or thousands of physical servers or PCs.
No reboot required.

MediWrite technologyengine resolves extreme file fragmentation issues
that can cause the File Attribute List (FAL) to reach its maximum size limit
and risk downtime in environments like MS Exchange, MS-SQL or some EHR
applications like MEDITECH.

Diskeeper Benefits
Keep Windows systems running
faster than new
Extends the life of hardware
Prevents fragmentation at the
Windows OS level
Caches hot reads with idle DRAM
True “Set It and Forget It”
management
Deploys to hundreds or thousands
of servers or PCs in a few clicks.
No reboot required

System Requirements
250MB of available hard drive
space. IntelliMemory caching
requires a minimum of 3GB of
memory on the system and at least
1.5GB of idle, available memory
before caching will initiate.
Supported Platforms
Windows 7 and above for Client OS
Windows Server 2008r2 and above
for Server OS 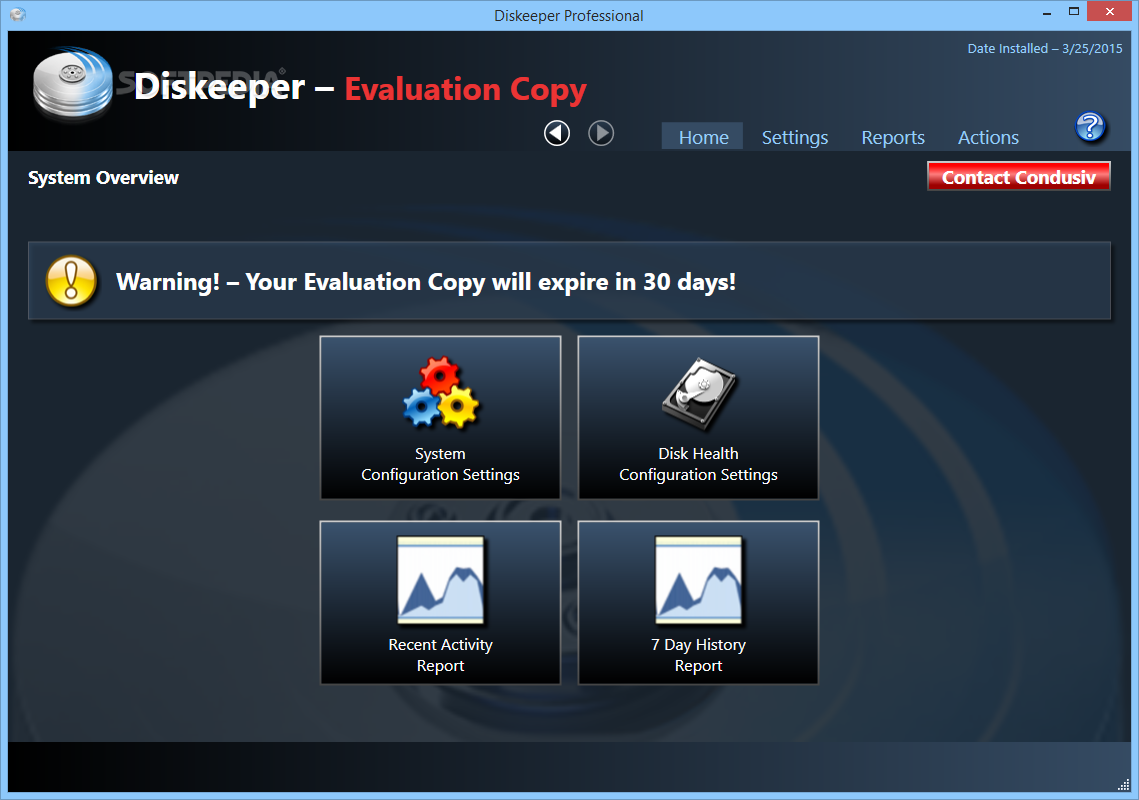 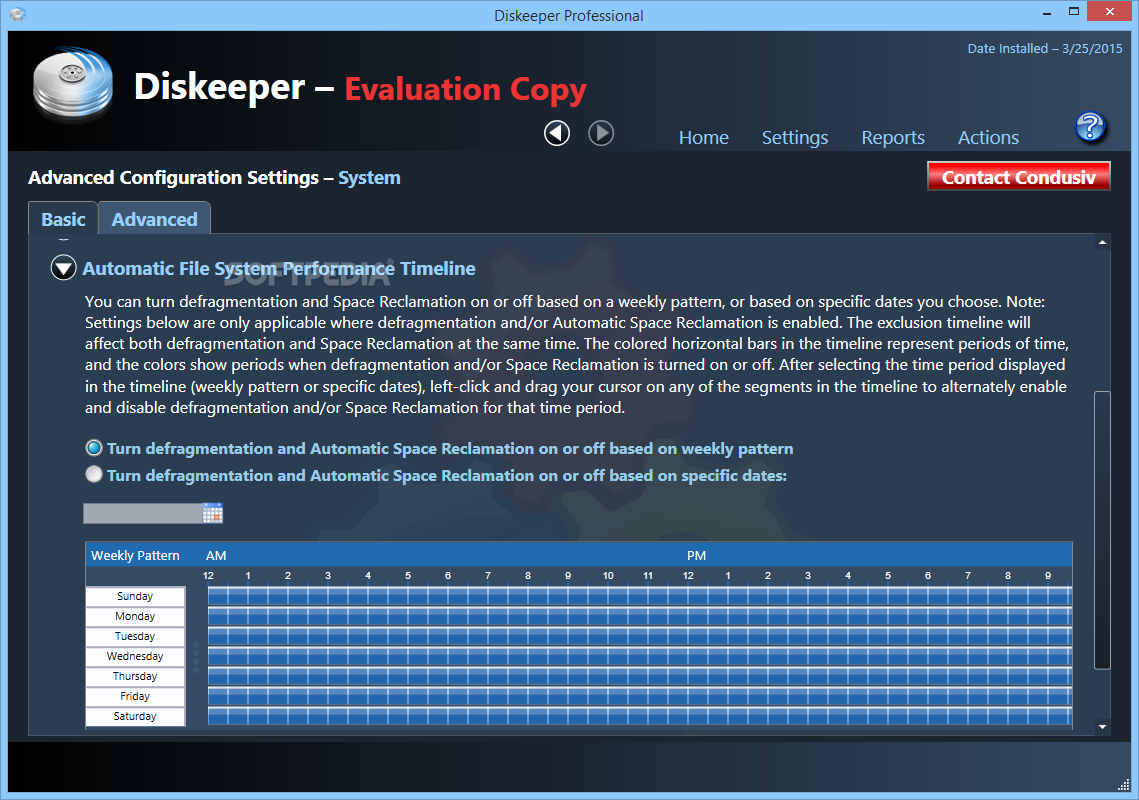 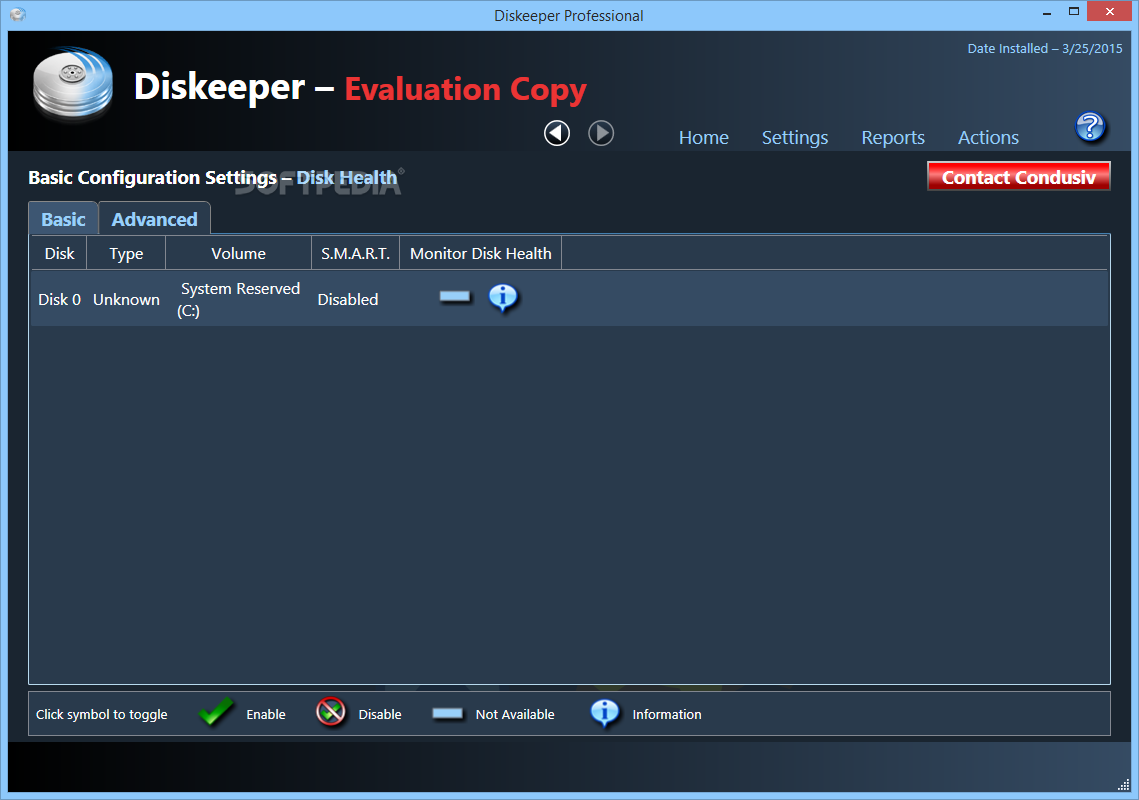 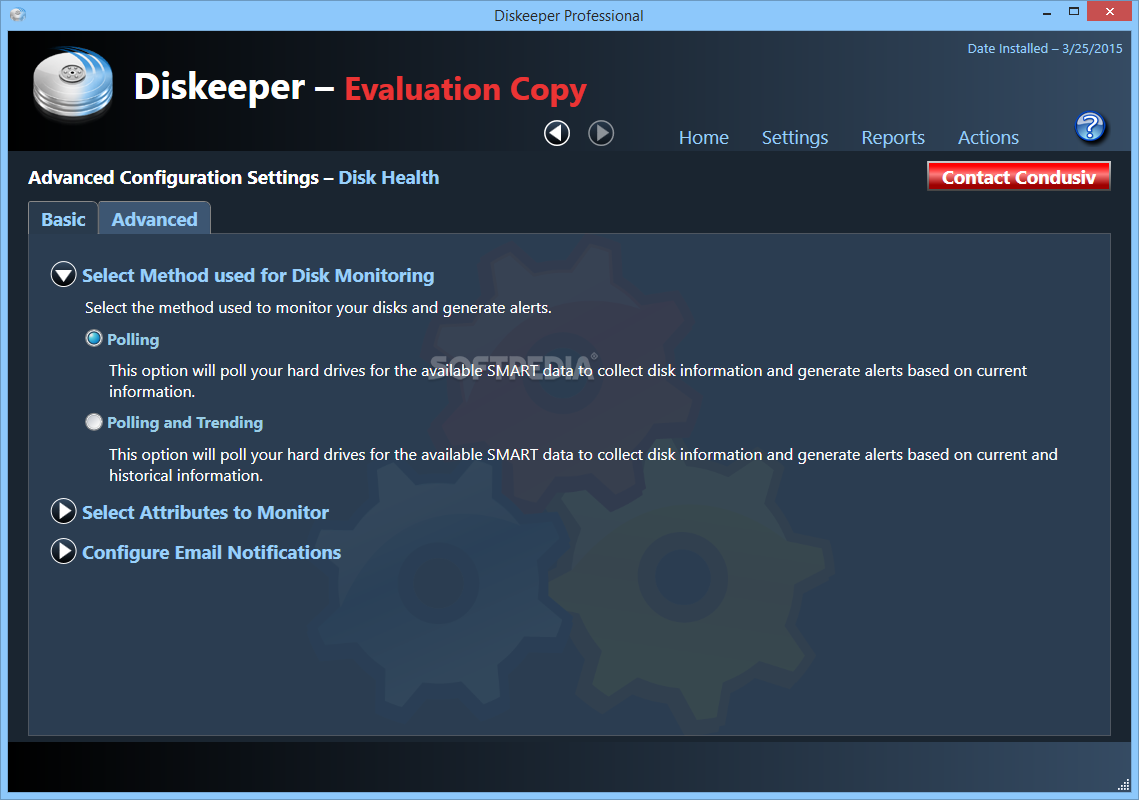 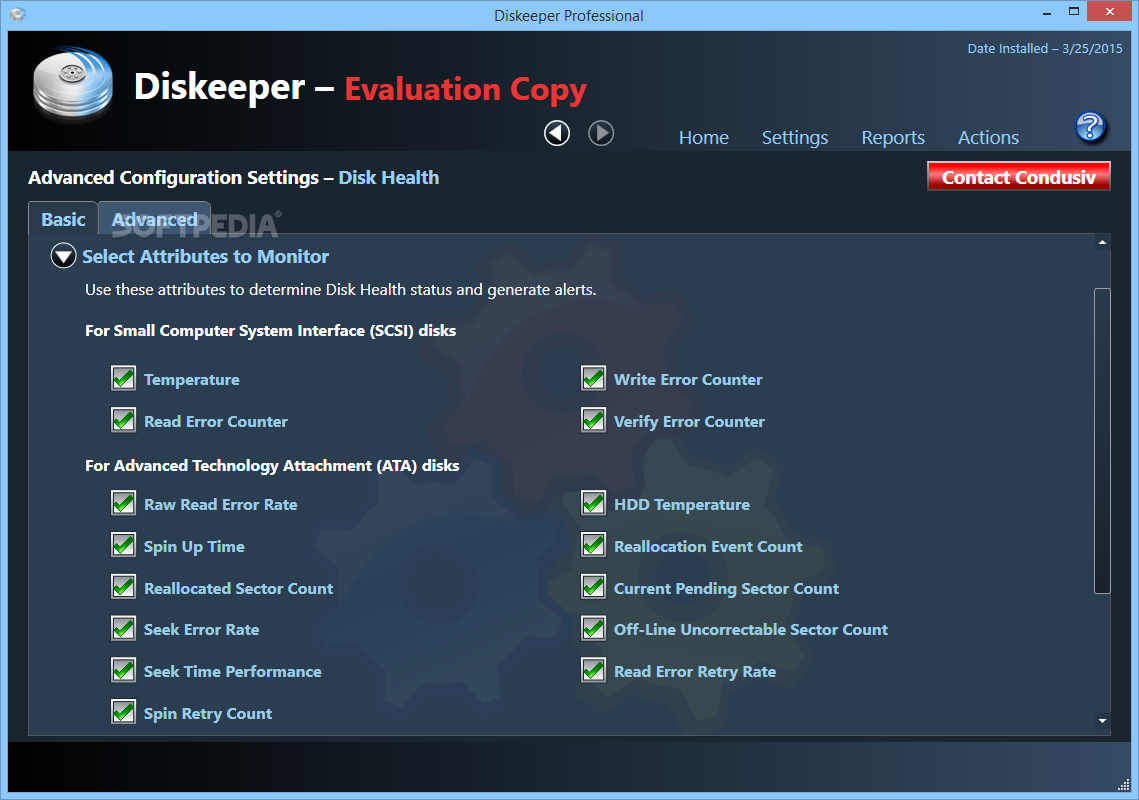 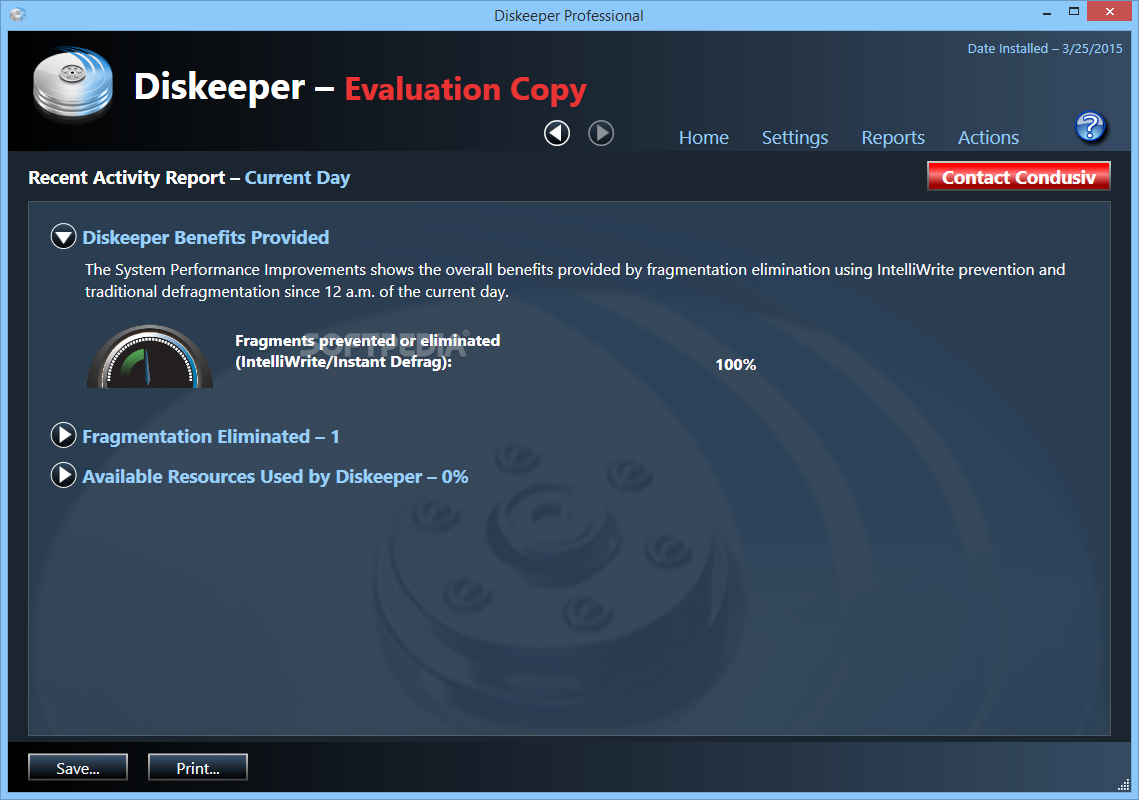 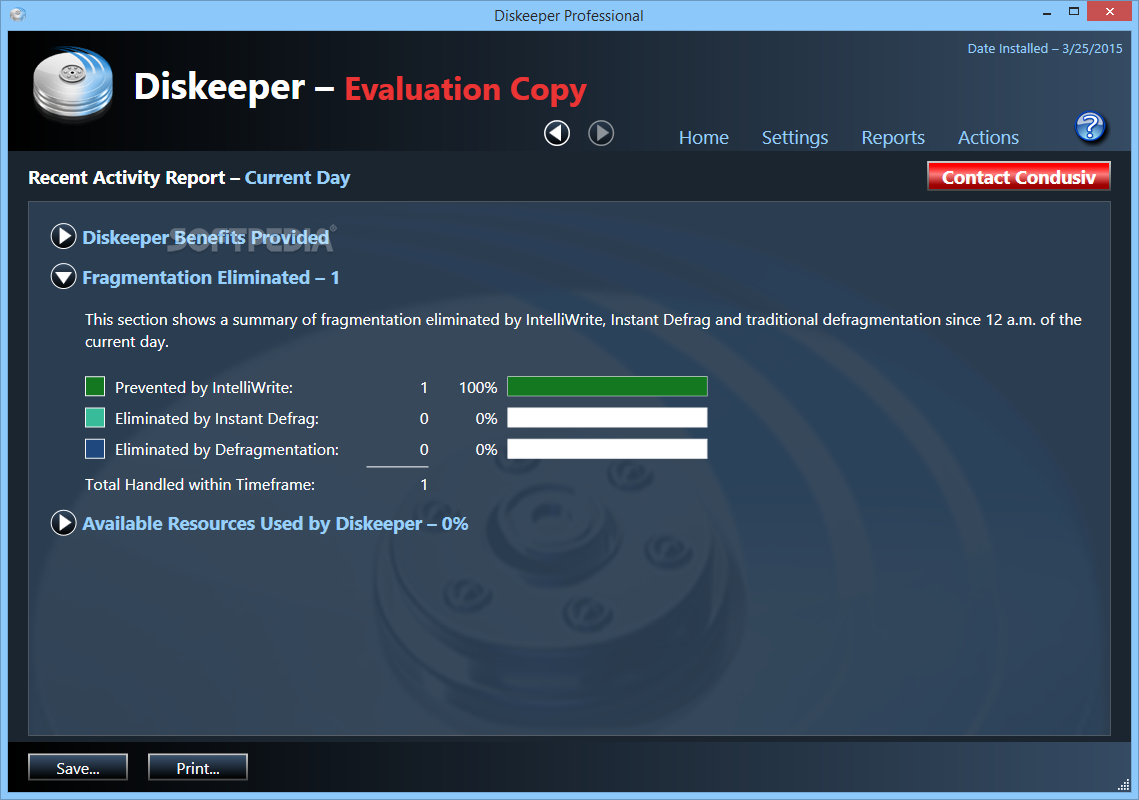 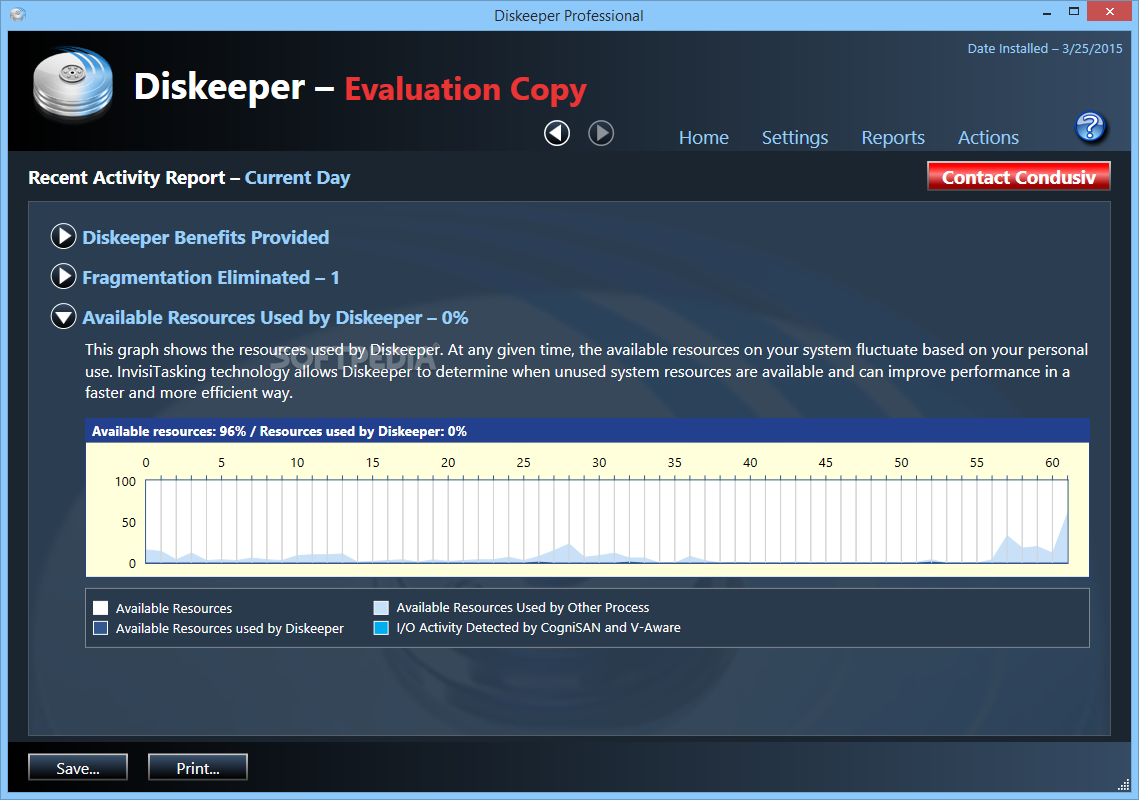 We would like to thank Spencer Allingham  Condusiv for sponsoring licenses for Promo2day users.

Validity of each license: lifetime 18.x

Winners will be selected by Random.org

One thought on “Diskeeper 18 Professional Review and Giveaway”

Help our forum out by making a small donation.